Today Demarious Cole releases his new single “All In,” Ft. DJ Luke Nasty. The song is a love song about trying to convince a woman that he’s 100% invested in trying to be with her.

Bred in the heart of the South where Friday night football and Saturday night college parties were a regularity, Demarious Cole was raised singing in the church his whole life. Similar to other great singers like Whitney Houston, Otis Redding, Marvin Gaye and John Legend, the church and gospel music helped develop Demarious Cole’s standout voice over the years.

“I’ve been singing in the church my whole life but I didn’t start taking R&B music seriously till I was about 18 when I started recording. My uncle in Huntsville had a little recording booth set up at his house at the time, so I went through and recorded my first R&B track. That night I played it for a few girls and after seeing their reactions, it was a wrap,” Demarious Cole said in a statement to the press.

Produced by Atlanta based producer Dominic Gordon, “All In” was co-written by Brandon Hesson. For the music video Demarious Cole called on Berlin the Photo God to produce and shoot the video. Berlin’s vision to shoot the video in black and white brings out a different type of aesthetic, bringing to life the timeless feel we have come to love from out R&B artists.

“All In” can be found on Demarious Cole’s album WildHeart which is set for release on August 29th. While he had plans for touring and special guest appearances at meet and greets throughout Atlanta and adjacent Southern states.

“Right now with everything going on in the world with social injustice still playing a major role in our society along with the Covid it’s just hard to tell when the world will start returning back to normal,” Demarious Cole said in regards to touring. “But just know that as soon as they approve a schedule on dates, we’ll def be out on the road. To everyone who’s been supporting me this far, I appreciate y’all. To everyone else just now seeing this, or hearing about me, get ya headphones ready cause we finna go crazy for a while!!”

tagged with DEMARIOUS COLE – “ALL IN” FT. DJ LUKE NASTY 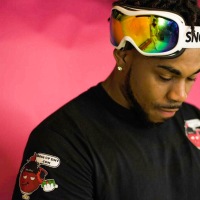