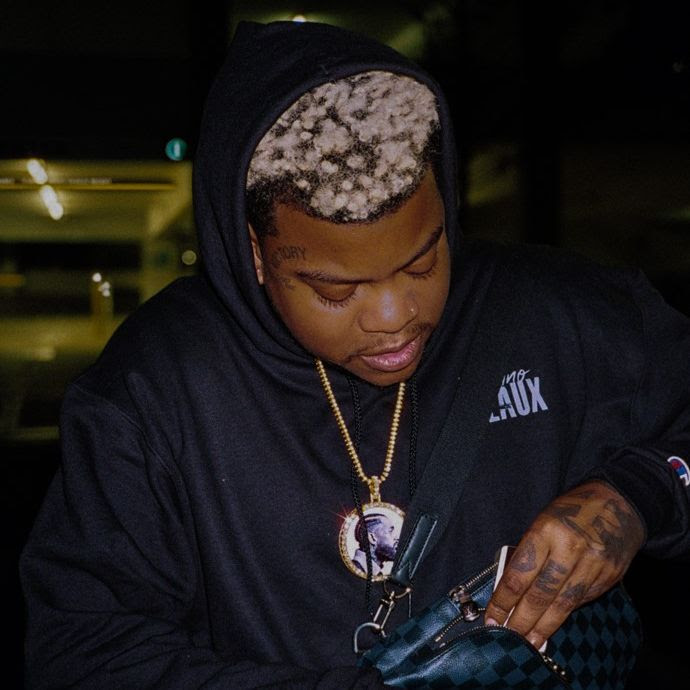 27-year old Bino Rideaux (born Brandon Rainey) is a case study in the hustle, grinding on his own and acquiring cosigns from some of the biggest names on his coast.  Influenced by the lure of the streets and emotive artists like Young Thug and Nas, Bino first received local attention in 2015, with Life Is Like A Movie, recorded in a make­shift studio at his grandmother’s house. He signed to Out The Blue Records, and broke through with “100 Days 100 Nights.”  As Bino explained, “I lost a homie, KP.  We made that track because a lot was going in the city. It was basically my hood versus the enemy’s hood.”

The track resonated with one fan in particular– Nipsey Hussle. He and Bino linked in the studio for “The Field” (2016) and “Clarity” (2017), and “we kept rocking ever since.”  The relationship indelibly changed Bino.  “That’s one of the most major parts that made me ‘me’ today. I feel a lot different than I was prior to meeting bro.”  HipHopDX chronicled their fateful meeting in the unforgettable “Bino Rideaux Recalls The Night He Met Nipsey Hussle Via Casey Veggies.”

With the blueprint of Nipsey’s business acumen and artistic inspiration in hand, Bino’s path was set.  He signed with Def Jam in January 2020, and “Pride 2 The Side,” his tribute to Nipsey, dropped in April. The track, LA WEEKLY wrote, “sees Rideaux genuinely struggling to make sense of Hussle’s death, lines like ‘now he’s lying with a hole in him’ recited with a sense of anguish. It’s particularly poignant, coming at a time when many of us are struggling with the concept of our own mortality.”  Meanwhile, “Brand New” and “BET” followed within weeks, and OUTSIDE was put on the Def Jam schedule to arrive May 22nd.

Bino, for his part, is promoting his latest projects during the shutdown with a series of safe activa­tions in Los Angeles, for example an interview with Travis Mills at Apple/Beats 1, which has been particularly supportive of Bino’s music.  “Real pain, real emotion, and most importantly real stories in this record,” he told COMPLEX.  “It’s been a whole year since we lost our brother,” he wrote in the description for the song on SoundCloud. “Shit will never be the same #LLNH FOREVER!”