“Lets Just Be Honest” is a brutally honest song about how I was afraid to approach a girl I thought was very attractive at the mall. I got anxiety and couldn’t find the words to say at the moment.

I went back a few days later to shoot a freestyle video about that exact event.

I ended up back at the store to buy a prop for the video and saw her there by herself! This is about what happened when I sucked it up and spoke with her.

Let’s just be honest, NiccoFeem was a liar. He unconsciously created a life for himself that he never believed in.

After forcing himself through college, his life fell apart. He worked for years doing jobs he hated thinking he would eventually earn the money to pay for his music. It never happened. He became unemployed, depressed, and angry, forcing him to move back in with his mother after 7 long years of constant failure.

Still haunted by the demons in his past he now lives with an undying passion to tell the truth. The unrelenting battle between his mind and heart still continues to wage in his conscious. This new perspective, though noble, comes at a cost. The truth isn’t always comforting.

He once considered honesty a weakness, now it has become his greatest weapon. 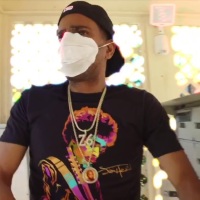